Because I walk to school or back home four times a day, the area of the city where I live has quickly become very familiar. Today I found myself stuck behind an obvious group of tourists who didn’t know where they were going, and I was immediately annoyed. They were taking up the whole sidewalk and taking loudly in English. I had to remind myself, uh, Beth, you’ve only been here three days. You’re one of those tourists, too!

This afternoon, classes differed from the regular routine. My teacher Jorge and I went on a trip to San Juan del Obispo. We met up at school, but then we walked through the city to the south to catch a “Chicken Bus”. These are school buses that are transformed into more or less public transit. They’re not anything official, but everyone uses them. In general, a guy stands in the open doorway yelling out the location that the bus is going to. So we took the chicken bus partway up Volcán de Agua. (Let me insert an aside here: it felt very strange to be having Spanish conversation out in public. My conversations have all been in the safety of the school, where only my teacher is paying attention, and anyone else overhearing is either a teacher or a student. Regular conversation out in public was a lot riskier!)

So, up in the village of San Juan del Obispo, my teacher and I went to a convent and museum. I was trying to read the signs, but my teacher also wanted to talk about them (and reading Spanish required a little more concentration than English!). A sister from the convent came along and chastised Jorge for not giving me a good enough tour. She took over, and so my official tour was done by a nun! She was really good about speaking clearly and slowly and asking me if I understood. It was fascinating to hear the history of the convent and some of the work the church did in the area. At a certain point in the tour, I realized that the only responses I was giving were ah, sí, mmhmmm. So I tried out some questions and actually got some practice speaking with other people! 😊🤓 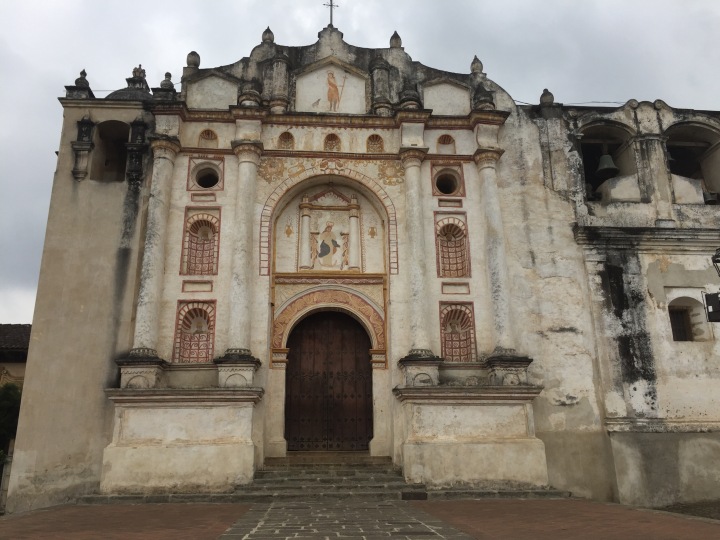 After the tour of the convent, Jorge and I walked down to a artisanal chocolate factory. I’m calling it a factory, but I don’t really know what to call it. Let me explain. Once again, a woman inside took over the touring and explanations. She showed me raw cocoa, talked about how it’s toasted, and then demonstrated how toasted cocoa crumbles easily. We got to taste some too. (Spoiler alert: it was pretty gross. Like eating unsweetened bakers chocolate. Because that’s pretty close to plain old toasted cocoa!)

Then we saw the machine that’s used to grind the cocoa. The chocolate they make is all organic, so basically all that’s added is sugar, plus the option of different spices. You could have chocolate with vanilla, or ginger, or chilli, or macadamia, or rice. Yep, rice! That’s a very traditional option, apparently.

From there, the chocolate is worked by hand into round disks about the size of a teacup saucer. We got to watch a bunch of people working, each taking a different step of rolling, flattening, rounding, and finishing. The disks are then stacked and dried for a couple of days before they get wrapped and brought to market.

Back in the sales room, I got to try a couple of samples. I wanted to taste the rice option, because mentally I had pictured a chocolate bar with chunks of rice in it. The rice is actually ground up along with the cocoa. It’s an interesting flavour – not like the chocolate covered rice I imagined! 😆 I didn’t buy that kind though! 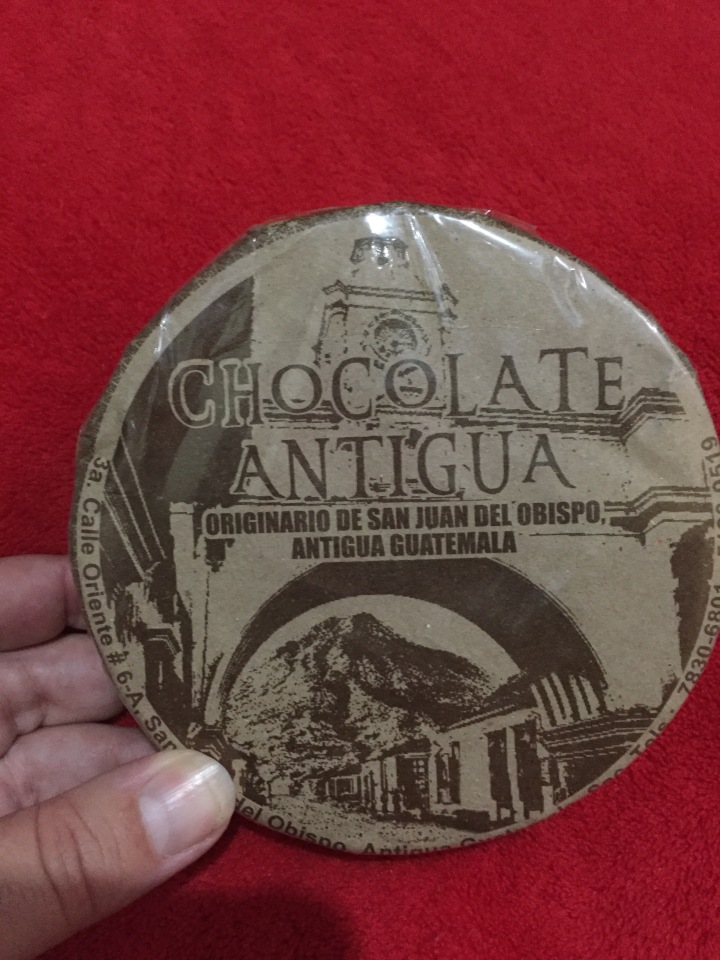 After we took the bus back down to Antigua, there was only a half hour of regular class time left. Instead of sitting and working, we decided (I decided) to call it quits for the day. That left me with enough time to curl up in the couch in the courtyard and actually have enough brain power to blog before supper! 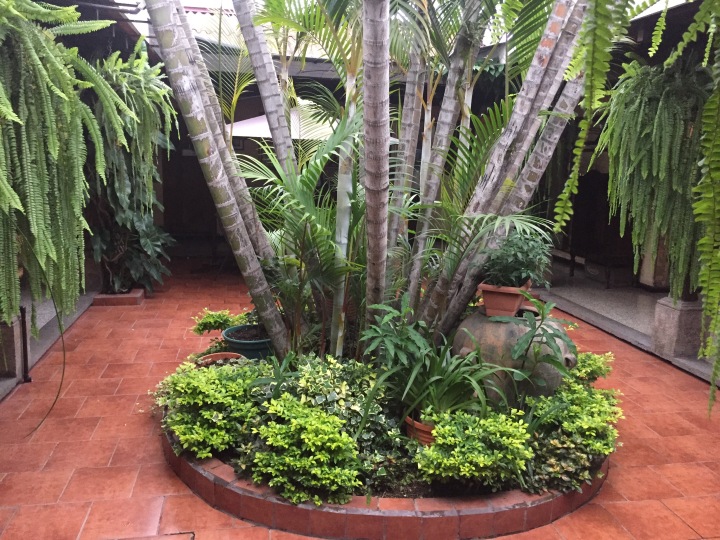 And who should come and climb up beside me? This little pup. We are not friends. He likes to nip at heels when any of us students walk around. But apparently he really wants to make friends!  We’ll see about that. 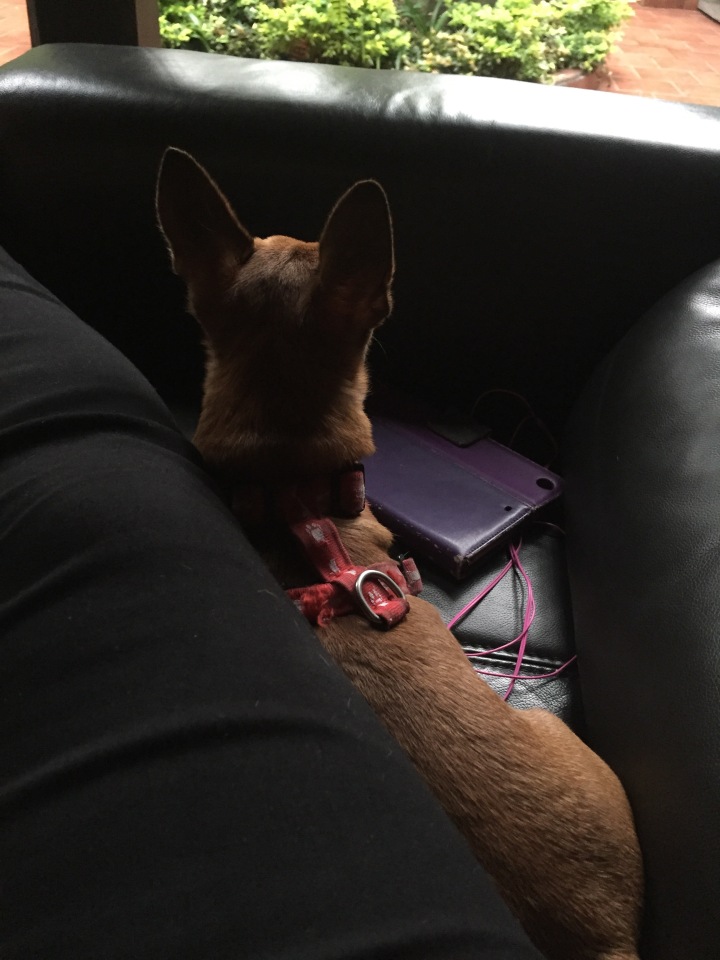 6 thoughts on “Life in Antigua”