With my Spanish classes finished, summer vacation could actually begin! And what better way to celebrate the start of summer vacation than to fly up to Tikal to spend a day exploring Mayan ruins?!

I decided to use the school’s tour agency because, as I naively assumed, everything would be taken care of for me. More on that adventure later.

So early Saturday morning, my roommate Julie and I were both up and waiting to be picked up and shuttled to the airport. We booked our trips through different agencies, so even though we live at the same house and were both going to the same place, we took different shuttles. My shuttle ride was a little terrifying, and I was glad that the streets were so empty at 4 in the morning!

At the airport, I met up with my roommate again after we had checked in and gone through security. There are only two domestic gates in the Guatemala City airport, so it wasn’t hard for us to find each other. We had different flight numbers, but we had the same departure time at the same gate and with the same airline, so we weren’t really sure if we were on separate flights or not.

Eventually we got called to board, and we were in fact leaving on separate planes. That’s because our planes were tiny propeller planes with approximately 40 seats! Two seats on one side of the aisle, and one seat on the other. (My roommate Julie later told me her plane was even smaller – no flight attendant! The flight attendant came on to give safety instructions and then got off. The cockpit was separated from the cabin with a curtain!) It wasn’t a long flight to Munro Maya Aeropuerto Internacional in Flores (a grand name for a tiny airport!) – about 45 minutes.

I came out of the airport and found the guy holding a sign with my name on it. He had one other person to pick up as well, and we waited until all the other people had come out of the airport, even the few who had waited to pick up checked bags. The other guy never came, so my pick-up person pawned me off to some other tour guy. He told me to go wait in the cafeteria area for a while. After about 15 minutes, he came and got me and a couple of other people, and we all got into his van. We drove over from the airport to the island of Flores. There we dropped some people off at their hotel, and the rest of us got pawned off to yet another driver.

This driver actually took us to Tikal. We drove through the Petén countryside for about an hour before coming to the entrance to the national park. There we had to pay our entrance fees, and then we drove for another 15 minutes to the main drop off. A guide joined us, and we were split into English and Spanish tour groups.

Tikal is an amazing experience, and I cannot do it justice with any description. There are also so many facts and stories that our guide recounted, but I feel like you can read better recountings or histories in other places. Let me tell a couple of highlights and give a few stories from a personal perspective.

Wandering through the jungle is an experience all its own, in the first place. Even though the trails we walked were well cleared and wide, there was no doubt about how alive the jungle around us was or how easily it would overtake the trails if it stopped being tended to regularly. We saw monkeys, parrots, ocellated turkeys, giant raccoon things (I think they were raccoons!), and heard so much more! We got a little lesson on how to eat termites if you get stuck in the jungle and need to eat to stay alive. Apparently they taste like carrots. I didn’t give them a try. 😒

We learned the Mayan number system (base 20, in case you’re interested), got a lesson on how to write the current year in that number system, and pulled out some quetzales to see that they have the same numbering system present on them. We learned about human sacrifice, and how the gods would want the best blood, so when you played a ballgame to determine who would be sacrificed, it was the winners who would have the honour of giving their lives.

We heard and saw and experienced these things in between plazas and temples. The temples and archaeological sites are obviously the main attraction. It never failed to amaze to be walking through the jungle and suddenly come up behind a giant temple!

The first temple we came to was a pretty small one, relatively speaking. You’re allowed to climb them, and I did so with great excitement.  My thoughts on the way up centred around the question why, if the Maya were so short, their steps were so gigantically tall. Getting up to the top made me immediately change my train of thinking to oh my goodness I could just accidentally walk off the top of this thing why are there no railings??? However, you can see out over the whole plaza, and that’s pretty impressive! Then going down. Ah, going down. The steps are narrow but super steep. And I have this problem with my balance. And I am also secretly (or not so secretly) convinced that I will die by falling down stairs and breaking my neck. And there are no hand railings. And my arthritic knee gives me a little pain on a downstairs trip. So I took the steps down super slowly and carefully!!!

Going to climb the first temple!

View from the top!

There were also ruins of buildings that we walked through along ledges where there was quite the drop off to one side. Or stairs up the side of a building with nothing but empty space beside. I’m so used to North American safety standards that I couldn’t help but think over and over again, you’d never be able to do this kind of thing in Canada! Someone asked the guide about this, and his answer was that in Guatemala, the buildings and their historical nature are valued more than the tourists. I was okay with that. I mean, people can choose to climb or not as they would like. It didn’t really bother me too much since I was making safe choices!

Some bigger temples were big enough to have new stairs built on the back, where they don’t ruin the look of the temple. I was super appreciative. 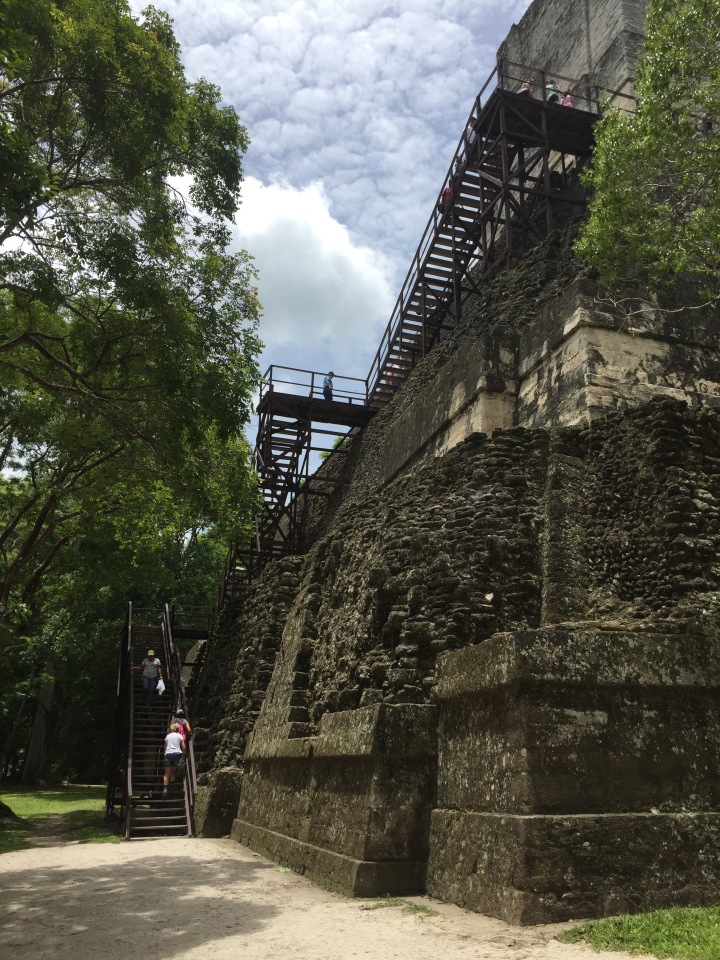 Actual stairs! With a hand railing!!!

Then we got to Templo IV. It’s the biggest, highest temple among the ruins. Thankfully, it too had modern stairs to climb. When I got to the top, I’m not going to lie – I was a little freaked out by the height and how little space there was on the platform. But there were the original stairs going up about 8 more steps, and most people just sat on them. Once I was sitting, it was fine.

The view from Templo IV, above the rainforest canopy.

And if you looked up, the sun was almost directly overhead and was wreathed by a rainbow!

It was an incredibly peaceful and beautiful place to sit and rest after hiking through the jungle and climbing up a million stairs.

Then some other tourists came along and ruined it. People kept coming up and asking others to take their picture taken by others. They would stand with their backs to the wide open space, and someone taking their picture would stand three feet away on the other end of the platform with their back against the temple wall. People standing right on the edge of the platform was kind of freaking me out, and I kind of became my mother, unable to watch that. That wasn’t good enough for some tourists, though, and they wanted to sit down on the edge of the platform with their feet dangling off. I could not handle watching them, and that was the point that I got off that temple as fast as I could (safely).  It’s one thing to say people are responsible for their own safety, but another thing to watch them throw caution to the wind. I didn’t want to watch anyone die.

Eventually, the afternoon was coming to a close and it was time to leave Tikal and head out to Flores. We found our driver, got back in the van, and he began dropping people off at their hotels. Soon, I was the only one left in the van. “Which hotel are you in?” he asked me. “What? I don’t know! Aren’t you supposed to know?” I responded. Remember how I said at the beginning of this story that I naively assumed everything would be taken care of for me since I booked the trip through an agency? Everything was booked for me, but somewhere in that line of people passing around tourists, information hadn’t been passed along with.

That was when my Tikal adventure officially became An Adventure.

My driver said he would call his friend. He did this while driving (of course), and we drove off the island which made me very curious because I was sure my hotel was in Flores. We stopped at a little store, and he said he needed to buy more minutes for his phone. He was back in the van in 30 seconds. That store was out of cards to recharge minutes. He eventually found a store with minutes and applied them, calling his friend who’d passed me along. That guy knew nothing. I thankfully remembered at that point in time that I had gotten the number of the woman at the school who’d helped to make arrangements through the tour agency. We called her, she made some calls, and within five minutes called back with the name of my hotel. Thank goodness!

I did a lot of it’s all part of the experience! What a fun adventure! self-talk through all that fun, but I was also glad to actually have a place to stay for the night! And I prefer the kind of trip where I actually know where I’m going and know what’s happening!

Saturday was a free day for me, so I spent the morning by the hotel pool (or in the pool), and the afternoon wandering around the cute island of Flores shopping or finding little cafes to sit in where I could be out of the hot sun and in a breeze, overlooking the lake. In short, first day of summer relaxing!!! All too soon it was time to take a Tuk Tuk back to the airport and head back to home sweet home Antigua.

Julie and I were much relieved to get out of the hot airplane and feel the cooler air of Guatemala City greet us. And we felt like experienced and seasoned travelers familiar with the airport amidst all the new arrivals last night. It’s funny how two weeks here has given a new perspective on the familiarity of so many experiences here. 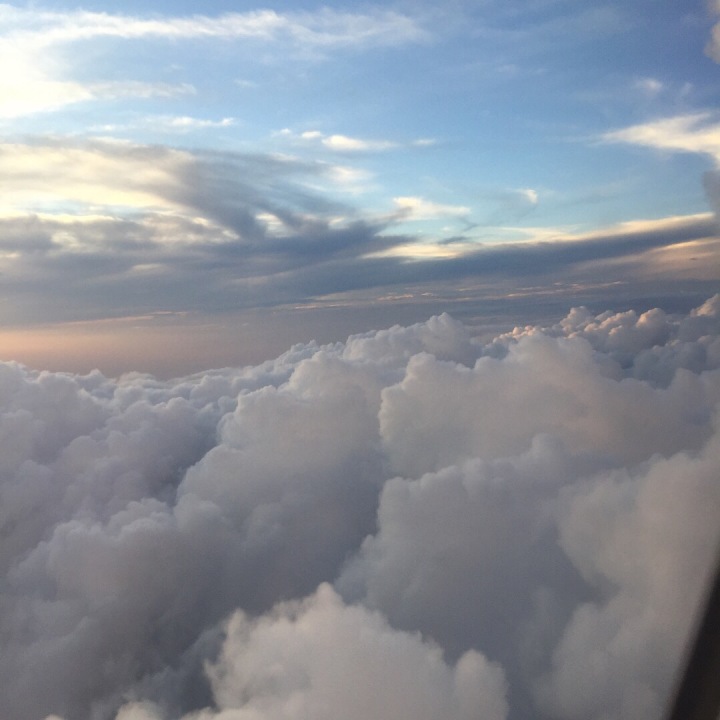 So many beautiful pictures from the flight back, including this one where you can see rain falling from the clouds we’re passing through!

3 thoughts on “Tikal: An Adventure in Guatemala”